This year felt like it finally found the permanent return of Boston indie rock powerhouse the Sheila Divine. After nearly a decade of reunions, one-offs, and a few bouts of new music, the beloved rock band last week has released new record The Morbs, a cohesive collection of tunes that not only follows up 2012’s The Things That Once Were, but serves to re-establish the Sheila Divine as one of Boston’s greatest acts.

And it’s the record where singer/guitarist Aaron Perrino re-found himself.

“This one was definitely my mid-life crisis album,” Perrino tells Vanyaland earlier this week. “I was reassessing how important music was to me after years of convincing myself otherwise. This album is the first one in a while where I tried to take my time and be thorough with the recording process. We used a lot more synths and ambient sounding guitars. There are still the signature TSD wall of distortion moments, but I think the album is a little more introspective then previous ones.”

Part of that reassessment was Perrino finding the ability to pull back a bit. He says that The Morbs, which drops today and is available to stream via the Zippah Records Bandcamp below, was a far more collaborative effort than past Sheila Divine material, with bassist Jim Gilbert and drummer Ryan Dolan contributing significantly to the writing process. “I really let Jim and Ryan have a bigger role in dictating the tempos and vibes of the songs,” Perrino says. “I went in with looser ideas and let the band creatively influence the direction of the songs.” 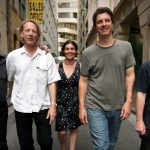